Steel and concrete, which have been used in building since the Industrial Revolution, are used principally for their very considerable strength as the structural frame members of large buildings where the compressive strength of concrete, separately or in combination with steel, is used for both columns and beams.

In the majority of small buildings, such as houses, the compressive strength of brick and stone is rarely fully utilised because the functional requirements of stability and exclusion of weather dictate a thickness of wall in excess of that required for strength alone. To support the very modest loads on the walls of small buildings the thinnest brick or stone wall would be quite adequate.

The stability of a wall may be affected by foundation movement (see
Chapter 1), eccentric loads, lateral forces (wind) and expansion due to temperature and moisture changes. Eccentric loads, that is those not acting on the centre of the thickness of the wall, such as from floors and roofs, and lateral forces, such as wind, tend to deform and overturn walls. The greater the eccentricity of the loads and the greater the lateral forces, the greater the tendency of a wall to deform, bow out of the vertical and lose stability. To prevent loss of stability, due to deformation under loads, building regulations and structural design calculations set limits to the height or thickness ratios (slenderness ratios) to provide reasonable stiffness against loss of stability due to deformation under load.

To provide stiffness against deformation under load, lateral, that is horizontal, restraint is provided by walls and roofs tied to the wall for stiffening up the height of the wall and by intersecting walls and piers that are bonded or tied to the wall as stiffening against deformation along the length of walls.
Irregular profile walls have greater stiffness against deformation than straight walls because of the buttressing effect of the angle of the zigzag, chevron, offset or serpentine profile of the walls, illustrated in Fig. 44. The more pronounced the chevron, zigzag, offset or serpentine of the wall, the stiffer it will be.
Similarly the diaphragm and fin walls, described in Volume 3, are stiffened against overturning and loss of stability by the cross ribs or diaphragms built across the wide cavity to diaphragm walls and the fins or piers that are built and bonded to straight walls in the fin wall construction. 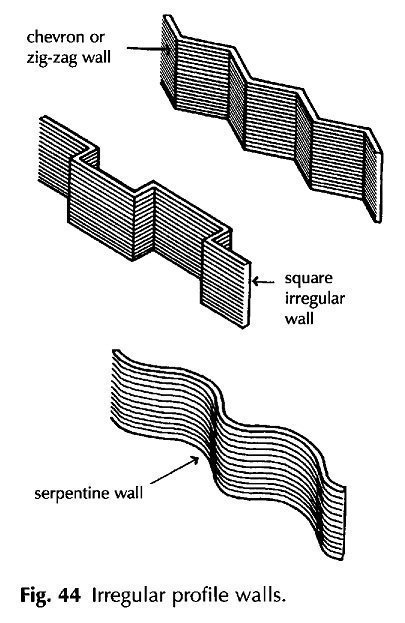 Lightweight aggregate concrete blocks for general use in building