The four faces of a brick which may be exposed in fairface brickwork are the two, long, stretcher faces and the two header faces illustrated in Fig. 51. The face on which the brick is laid is the bed. Some bricks have an indent or frog formed in one of the bed faces. The purpose of the frog or indent is to assist in compressing the wet clay during moulding. The frog also serves as a reservoir of mortar on to which bricks in the course above may more easily be bedded. 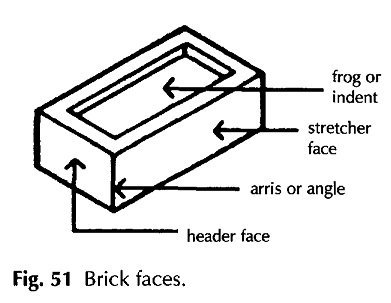 The external leaf of a cavity wall is often built of brick for the advantage of the appearance of brickwork. The most straightforward way of laying bricks in a thin outer leaf of a cavity wall is with the stretcher face of each brick showing externally. So that bricks are bonded along the length of the wall they are laid with the vertical joints between bricks lying directly under and over the centre of bricks in the courses under and over. This is described as stretcher bond as illustrated in Fig. 52. This wall is described as a \ B thick wall. 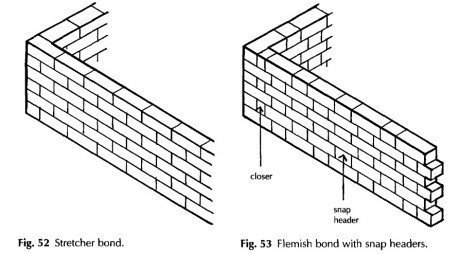 At the intersection of two half brick walls at corners or angles and at the jambs, sides of openings, the bricks are laid so that a header face shows in every other course to complete the bond, as illustrated in Fig. 52.
The appearance of a wall laid in stretcher bond may look somewhat monotonous because of the mass of stretcher faces showing. To provide some variety the wall may be built with snap headers so that a stretcher face and a header face show alternately in each course with the centre of the header face lying directly under and over the centre of the stretcher faces in courses below and above, as illustrated in Fig. 53.

This form of fake Flemish bond is achieved by the use of half bricks, hence the name ‘snap header’. The combination and variety in colour and shape can add appreciably to the appearance of a wall. Obviously the additional labour and likely wastage of bricks adds somewhat to cost.

Walls Durability and freedom from maintenance

Head of openings in cavity walls