Beds of natural slate were quarried and the heavily compressed, dense material that was formed in layers was split to thin slates that were sufficiently impermeable to water to serve as an effective dpc.

Two courses of dense Welsh slates were laid at first in lime or hydraulic lime and sand, and later in cement and sand. The slates were laid on a bed of mortar in two courses, breaking joint as illustrated in Fig. 36. Because of the small units of slate and the joints being staggered this dpc could remain reasonably effective where moderate settlement occurred. 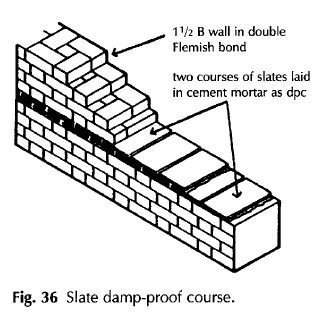 To be effective the edges of the slates should be exposed on a wall face and not be covered, which made a deep, somewhat ugly joint.
The majority of external brick walls are built as a cavity today and it would be laborious, wasteful and therefore expensive to use a separate slate dpc in each leaf of the wall.
Tags
wall
Facebook Twitter LinkedIn Tumblr Pinterest Reddit VKontakte Odnoklassniki Pocket WhatsApp Share via Email