A raft foundation consists of a raft of reinforced concrete under the whole of a building. This type of foundation is described as a raft in the sense that the concrete raft is cast on the surface of the ground which supports it, as water does a raft, and the foundation is not fixed by foundations carried down into the subsoil.

Raft foundations may be used for buildings on compressible ground such as very soft clay, alluvial deposits and compressible fill material where strip, pad or pile foundations would not provide a stable foundation without excessive excavation. The reinforced concrete raft is designed to transmit the whole load of the building from the raft to the ground where the small spread loads will cause little if any appreciable settlement.

The two types of raft foundation commonly used are the flat raft and the wide toe raft.

The flat slab raft is of uniform thickness under the whole of the building and reinforced to spread the loads from the walls uniformly over the under surface to the ground. This type of raft may be used under small buildings such as bungalows and two storey houses where the comparatively small loads on foundations can be spread safely and economically under the rafts. 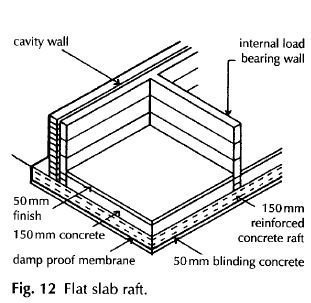 The concrete raft may be at ground level or finished just below the surface for appearance sake. Where floor finishes are to be laid on the raft a 50 mm thick layer of concrete is spread over the raft, between the walls, to raise the level and provide a level, smooth finish for floor coverings. As an alternative a raised floor may be constructed on top of the raft to raise the floor above ground.

A flat slab recommended for building in areas subject to mining subsidence is similar to the flat slab, but cast on a bed of fine granular material 150 mm thick so that the raft is not keyed to the ground and is therefore unaffected by horizontal ground strains.

Where the ground has poor compressibility and the loads on the foundations would require a thick, uneconomic flat slab, it is usual to cast the raft as a wide toe raft foundation. The raft is cast with a reinforced concrete, stiffening edge beam from which a reinforced concrete toe extends as a base for the external leaf of a cavity wall as shown in Fig. 13. The slab is thickened under internal load bearing walls.
Vegetable top soil is removed and the exposed surface is cut away to roughly form the profile of the underside of the slab. As necessary 100 mm of hardcore or concrete is spread under the area of the raft and a 50 mm layer of blinding concrete is spread, shaped and levelled as a base for the raft and toes. A waterproof membrane is laid on the dried concrete blinding and the steel reinforcement fixed in position and supported preparatory to placing, compacting and levelling the concrete raft. 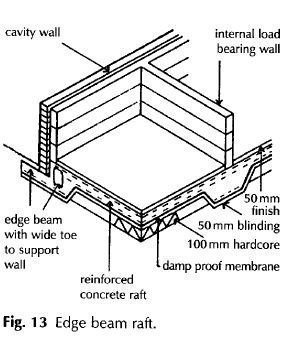 The external cavity and internal solid walls are raised off the concrete raft once it has developed sufficient strength. The extended toe of the edge beam is shaped so that the external brick outer leaf of the cavity wall is finished below ground for appearance sake. A floor finish is laid on 50 mm concrete finish or a raised floor constructed.