On sites where the slope of the ground is such that there is an appreciable fall in the surface across the width or length of a building, and a raft foundation is to be used, because of the poor bearing capacity of subsoil, it is necessary either to cut into the surface or provide additional fill under the building or a combination of both to provide a level base for the raft.
It is advisable to minimise the extent of disturbance of the soft or uncertain subsoil. Where the slope is shallow and the design and use of the building allows, a stepped raft may be used down the slope, as illustrated in Fig. 14. 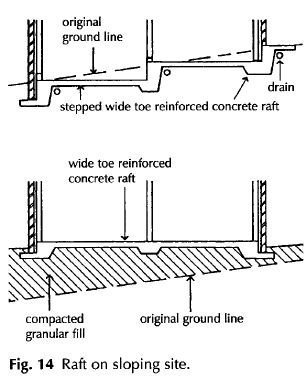 A stepped, wide toe, reinforced concrete raft is formed with the step or steps made at the point of a load bearing internal wall or at a division wall between compartments or occupations. The drains under the raft are to relieve and discharge surface water running down the slope that might otherwise be trapped against steps and promote dampness in the building.
The level raft illustrated in Fig. 14 is cast on imported granular fill that is spread, consolidated and levelled as a base for the raft. The disadvantage of this is the cost of the additional granular fill and the advantage a level bed of uniform consistency under the raft.

As an alternative the system of cut and fill may be used to reduce the volume of imported fill.

Raft foundations are usually formed on ground of soft subsoil or made up ground where the bearing capacity is low or uncertain, to minimise settlement. There is some possibility of there being some slight movement of the ground under the building which would fracture drains and other service pipes entering the building through the raft. Service pipes rising through the raft should run through collars, cast in the concrete, which will allow some movement of the raft without fracturing service pipes.