The practical guidance in Approved Document A in regard to openings in walls states that the number, size and position of openings should not impair the stability of a wall to the extent that the com­bined width of openings in walls between the centre line of buttressing walls or piers should not exceed two-thirds of the length of that wall together with more detailed requirements limiting the size of opening and recesses. There is a requirement that the bearing end of lintels with a clear span of 1200 mm or less may be 100 mm and above that span, 150 mm.

Figure 73 is an illustration of a window opening in a brick wall with the terms used to describe the parts noted. 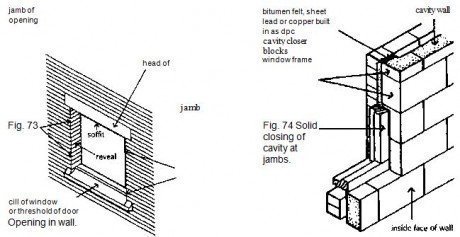 The cavity in a cavity wall serves to prevent penetration of water to the inner leaf. In the construction of the conventional cavity wall, before the adoption of cavity insulation, it was considered wise to close the cavity at the jambs of openings to maintain comparatively still air in the cavity as insulation. It was practice to build in cut bricks or blocks as cavity closers. To prevent penetration of water through the solid closing of cavity walls at jambs, a vertical dpc was built in as illustrated in Fig. 74. Strips of bitumen felt or lead were nailed to the back of wood frames and bedded between the solid filling and the outer leaf as shown
As an alternative to solidly filling the cavity at jambs with cavity
closers, window or door frames were used to cover and seal the cavity.
Pressed metal subframes to windows were specifically designed for
jamb of steel this purpose, as illustrated in Fig. 75. With mastic pointing between
su rame ^ metai subframe and the outer reveal, this is a satisfactory way of sealing cavities.
At the time when it first became common practice to fill the cavity solidly at jambs, there was no requirement for the insulation of walls. When insulation first became a requirement it was met by the use of lightweight, insulating concrete blocks as the inner leaf and the practice of solid filling of cavity at jambs, with a vertical dpc continued.
With the increasing requirement for insulation it has become practice to use cavity insulation as the most practical position for a layer of lightweight material. If the cavity insulation is to be effective for the whole of the wall it must be continued up to the back of window and door frames, as a solid filling of cavity at jambs would be a less effective insulator and act as a thermal or cold bridge.
With the revision of the requirement of the Building Regulations for enhanced insulation down to a standard U value of 0.45 W/m2K window for the walls of dwellings it has become practice to use cavity insu-frame lation continued up to the frames of openings, as illustrated in Fig. 76, to avoid the cold bridge effect caused by solid filling. Door and window frames are set in position to overlap the outer leaf with a frame bedded resilient mastic pointing as a barrier to rain penetration between the m mo ar frame ancj the jamb. With a cavity 100 mm wide and cavity insulation as partial fill, it is necessary to cover that part of the cavity at jambs of openings, that is not covered by the frame. This can be effected by covering the cavity with plaster on metal lath or by the use of jamb linings of wood, as illustrated in Fig. 77. 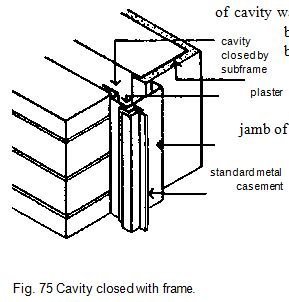 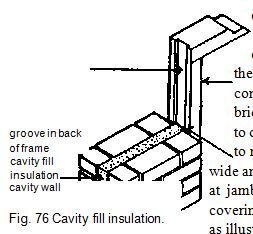 With this form of construction at the jambs of openings there is no purpose in forming a vertical dpc at jambs.
The advantages of the wide cavity is that the benefit of the use of the cavity insulation can be combined with the cavity air space as resistance to the penetration of water to the inside face of the wall.

The length of wall ties

Cills and thresholds of openings