In positions of severe exposure to wind driven rain, the outer leaf of a cavity wall may absorb water to the extent that rainwater penetrates to the cavity side of the outer leaf. It is unlikely, however, that water will enter the cavity unless there are faults in construction.

Where the mortar joints in the outer leaf of a cavity wall are inadequately flushed up with mortar, or the bricks in the outer leaf are grossly porous and where the wall is subject to severe or very severe exposure, there is a possibility that wind driven rain may penetrate through the outer leaf to the cavity

Some consider it good practice to use some form of impermeable cavity tray above all horizontal breaks in a cavity wall against the possibility of rainwater penetrating the outer leaf. The dubious argument is that freely flowing water may enter the cavity in sufficient run down on to horizontal breaks in walls, such as carried down to openings, and cause damp staining. Having been persuaded that it is sense to accept this idea, it has become common practice to build

in some form of damp-proof course or tray of flexible, impermeable material to direct freely flowing water out to the external face of walls. A strip of polymer based polythene, bitumen felt or sheet lead is used for the purpose. The dpc and tray shown in Fig. 82 is built in at the top of the inner lintel and dressed down to the underside of the outer lintel over the head of the window. As an alternative the dpc tray could be built in on top of the second block course and dressed down to the top of the outer lintel, with weep holes in the vertical brick joints.

If there were a real need for these trays it would be common to observe the evidence of water seeping through these weep holes to the outer face of cavity walls. No such evidence exists where cavity walls are sensibly designed and soundly constructed. A disadvantage of the weep holes is that cold air may enter and cool the air space and increase thermal transmission.

Good sense dictates that the notion of the dpc trays in cavity walls be abandoned. 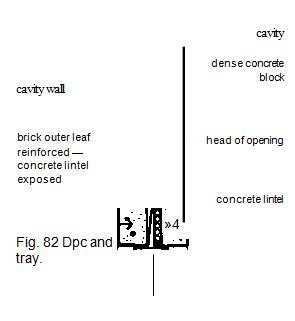 Resistance to the passage of heat

Because the resistance to the passage of heat of a cavity wall by itself is poor, it is necessary to introduce a material with high resistance to heat transfer to the wall construction.

Most of the materials, thermal insulators, that afford high resistance to heat transfer are fibrous or cellular, lightweight, have comparatively poor mechanical strength and are not suitable by  themselves for use as part of the wall structure. The logical position for such material in a cavity wall, therefore, is inside the cavity.

Bricks bonding at angles and jambs