Walls, such as garden walls, that are to be finished fairface both sides and built 1 B thick are often built in one of the garden wall bonds.
Because of the variations in size and shape of many facing bricks it is difficult to finish a 1 B wall fairface both sides because of the differences in length of bricks that are bonded through the thickness of the wall.
Garden wall bonds are designed specifically to reduce the number of through headers to minimise the labour in selecting bricks of roughly the same length for use as headers. 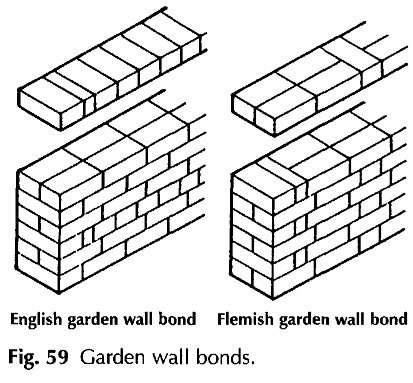 Bricks bonding at angles and jambs

WALLS OF BRICK AND BLOCK