The word brick is used to describe a small block of burned clay of such size that it can be conveniently held in one hand and is slightly longer than twice its width. Blocks made from sand and lime or concrete are manufactured in clay brick size and these are also called bricks. The great majority of bricks in use today are of clay. 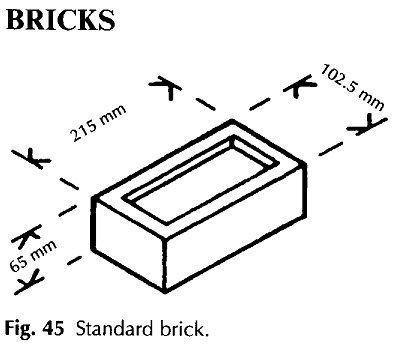 In this country there are very extensive areas of clay soil suitable for brickmaking. Clay differs quite widely in composition from place to place and the clay dug from one part of a field may well be quite different from that dug from another part of the same field. Clay is ground in mills, mixed with water to make it plastic and moulded, either by hand or machine, to the shape and size of a brick.

Bricks that are shaped and pressed by hand in a sanded wood mould and then dried and fired have a sandy texture, are irregular in shape and colour and are used as facing bricks due to the variety of their shape, colour and texture.

A brick wall has very good fire resistance, is a poor insulator against transference of heat, does not, if well built, deteriorate structurally and requires very little maintenance over a long period of time. Bricks are cheap because there is an abundance of the natural material from which they are made, that is clay. The clay can easily be dug out of the ground, it can readily be made plastic for moulding into brick shapes and it can be burned into a hard, durable mass at a temperature which can be achieved with quite primitive equipment.

Because there is wide variation in the composition of the clays suitable for brick making and because it is possible to burn bricks over quite a wide range of temperatures sufficient to fuse the material into a durable mass, a large variety of bricks are produced in this country. The bricks produced which are suitable for building vary in colour from almost dead white to practically black and in texture from almost as smooth as glass to open coarse grained. Some are quite light in weight and others dense and heavy and there is a wide selection of colours, textures and densities between the extremes noted.

It is not possible to classify bricks simply as good and bad as some are good for one purpose and not for another. Bricks may be classified in accordance with their uses as commons, facing and engineering bricks or by their quality as internal quality, ordinary quality and special quality. The use and quality classifications roughly coincide, as commons are much used for internal walls, facing or ordinary quality for external walls and engineering or special quality bricks for their density and durability in positions of extreme exposure. In cost, commons are cheaper than facings and facings cheaper than engineering bricks.

Head of openings in solid walls