Blocks are made in various thicknesses to suit most wall requirements and are laid in stretcher bond.

Thin blocks, used for non-loadbearing partitions, are laid in running stretcher bond with each block centred over and under blocks above and below. At return angles full blocks bond into the return wall in every other course, as illustrated in Fig. 62. So as not to disturb the full width bonding of blocks at angles, for the sake of stability, a short length of cut block is used as closer and infill block.

Thicker blocks are laid in off centre running bond with a three quarter length block at stop ends and sides of openings. The off centre bond is acceptable with thicker blocks as it avoids the use of cut blocks to complete the bond at angles, as illustrated in Fig. 62.

Thick blocks, whose length is twice their width, are laid in running (stretcher) bond as illustrated in Fig. 62, and cut blocks are only necessary to complete the bond at stop ends and sides of opening.
At the ‘T’ junctions of loadbearing concrete block walls it is sometimes considered good practice to butt the end face of the intersecting walls with a continuous vertical joint to accommodate shrinkage movements and to minimise cracking of plaster finishes. 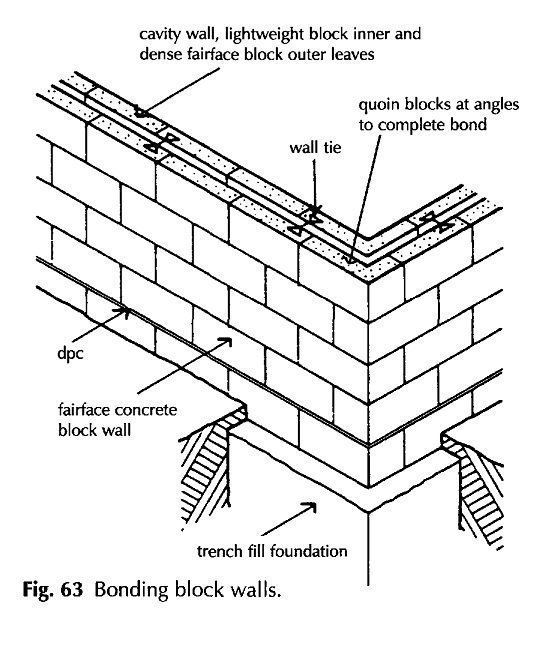 MORTAR FOR BRICKWORK AND BLOCKWORK

Lightweight aggregate concrete blocks for general use in building